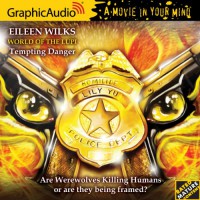 Audiobook. I have also read the paperback.

This audiobook is an ensemble cast which is great in some ways, they have a different person for each character. They also do sound effects, which is sometimes okay. The moans and groans during the romance were pornish and when Lily was pulling weeds the grunting went on forever! I get it that she's pulling weeds, grunt a little in the beginning and then stop. We know that while she's running her inner dialogue she's still pulling weeds. We get it.