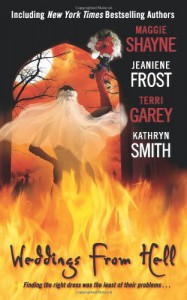 The Maggie Shayne story was good although a lot rushed. But that's probably because it's a short story. Kira confronted Ian about a curse within minutes of meeting him and they fell in love in a day.

The Jeaniene Frost story was good. I loved grandmother Greta and the romance between Chance and Isa was done well. There's a couple of scenes with Bones too. Greta and Bones used to have a thing a long time before.

The Terri Garey story was different. She's able to see dead people after having a near death experience herself. A few sexy talk between Nicki and Joe. A murder mystery that needs to be solved. This is the first time I've read her stuff and it was pretty good.

Kathyrn Smith's another one of those super fast short stories. At least Violet and Payen had known each other before. Throw in a little Masonic-ish anti vampire group out to kill/kidnap Payen, and there was some added excitement.