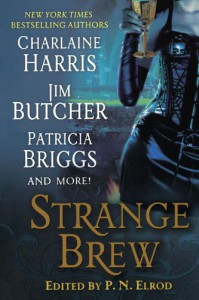 03/06/11 re-read as an audiobooks - also own the book
I took the average of the ratings and it still became a 3. Sometimes when I listen to the audio version of a book I previously listened to I enjoy it more, but I guess not this one so the 3 star rating stands.

1. Patricia Briggs. Blind witch Moira meets Tom, a werewolf, when he needs her to find his brother who was kidnapped by her evil father. It ends with her as his mate. Good story. ****

2. Jim Butcher. Contaminated beer and who did it. I am not much of a Dresden fan. No matter how many books or short stories I read, my opinion doesn't change. **

4. Karen Chance. Lea is a war mage that wakes up to find her students are out to get her. This is the second story I've read about her. ****

6. Charlaine Harris - Dahlia, the tiny vampire with a bad attitude. She's out to get the people who had her husband killed. ***

7. Faith Hunter. I didn't realize this before, because I just recently started reading the Jane Yellowrock books, but this is the first story I had read about her. She's not the main character, her friend Molly is. Very, very gruesome. Child rape and murder. ***

8. Kaitlyn Kitteridge. Sunny is called before coven after a little magic show she does in a courtroom. The coven is of course evil and stealing power from magic children. This is another story where I didn't realize until the re-read that I had read another short story about her cousin Luna. ***


Previous reviewI liked the stories by Briggs, Caine, Chance, Harris and the beginning of the MacLaine story but that story ended strange. Book #2 of the read-a-thon.
Tweet
3774 BOOKS