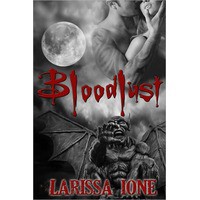 Disturbing story of Sorla buying Brynn at a slave market after he's captured during a battle. She's a vampire and he thinks he's going to his death. She wants to make him her sex slave but then changes her mind and makes him a vampire too. Now he's not sure if he wants her to survive. A little stupid of her since she treated him like shit right before.
Tweet
3774 BOOKS