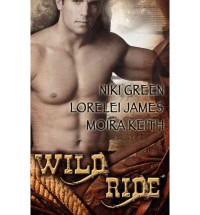 Anthology. Better than average anthology. I liked all 3 stories. If you like western romances with sexual situations, you'll enjoy this anthology.

Buckling Down by Moira Keith. Levi is participating in his last rodeo in Las Vegas. When he goes out with a bunch of competitors, he sees his old friend Dusty and Dusty's sister Sydney. He's always had a thing for Sydney and now wants to see if he can make a go of it. Enjoyed the story. ***1/2

Strong, Silent Type by Lorelei James. Libby and Quinn have been separated for awhile. He doesn't know what to do, he thought they'd just eventually get back together. She doesn't think he cares anymore. Quinn finally listens to friends and starts to woo her. Libby realizes she's been so focused on what was happening to her, she didn't see how much it was hurting Quinn. So they spend a weekend getting to know each other again and telling each other things they've only fantasized about. I didn't think it needed the over the top HEA, it would have been fine without it but overall the story was really good. ****

The Real Deal by Niki Green. Another good one, I think the best of the bunch. Willa ran from Chase after he asked her to marry him. 2-1/2 years later two of Chase's brothers see her at a burlesque show. Chase finds out and comes to get her. I loved Willa and I assume this is part of a series because there are 5 brothers. I definitely plan on reading more from this author. ****1/2