THE PLAGUE by ALBERT CAMUS 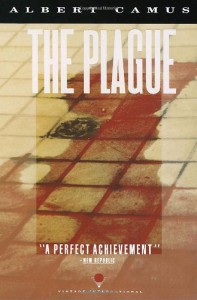 I purchased this audiobook because I'm into apocalyptic/dystopian books and thought from the cover that this is what the book would be about. It's slightly like that. There's an outbreak of the bubonic plague in a town in Algeria which ends up being cut off from the outside world until it ends. So, an American book would have mayhem, bad guys trying to take over, love in the middle of the plague, starvation - this book had none of that. There was some discouragement but even the camp where people were stuck for months wasn't bad. The American version would have the camp be a hell on earth. There were a lot of speeches by different characters - a couple were actually moving. The book ended very mildly too. I'm just not used to this type of non-dystopian book.