AN APPLE FOR THE CREATURE - Anthology 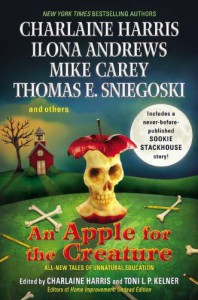 Anthology The average star rating is 3.42 stars out of 5. So a little better than average. Some good short stories and some stinkers. So about usual for an anthology.

2. Spellcaster 2.0 by Jonathan Maberry. A college student is forced to change his beliefs and gets a fresh start. Pretty good story. 3-1/2 stars.

3. Academy Field Trip by Donald Harstad. Really good story. I figured out what was going on after a couple of pages but that's because I read mysteries all the time. 4 stars.

4. Sympathy for the Bones by Marjorie M. Liu. Escape through any means, but I think history is repeating itself. 4 stars.

5. Low School by Rhys Bowen. A bad person is sent to her hell, which is high school before she improved herself. She didn't change her attitude at all once there. I didn't care for the story. 2 stars.

6. Callie Meet Happy by Amber Benson. Callie has to take a class to learn how to move through wormholes and no one is nice to her even though she's the boss. I didn't care for this story either. 2 stars.

7. Iphigenia in Aulis by Mike Carey. Super good story about what is done to "rescued" zombie babies. Loved it, great ending! 5 stars.

8. Golden Delicious by Faith Hunter. Rick's life has changed so he's being trained for the new phase in his life. At the training, he helps to solve a mystery there. 3-1/2 stars.

9. Magic Tests by Ilona Andrews. This story is about Julie's first day at high school I guess you could call it. I had read this before but I can't remember if it was as a stand alone or in an anthology. I enjoyed it. 4 stars.

10. An Introduction to Jewish Myth and Mysticism by Steve Hockensmith. A man nags a killer so much that he ends up leaving. 3 stars.

12. The Bad Hour by Thomas E. Sniegoski. I don't like reading stories about angels. I figuratively and literally read with a grimace on my face. No rating because I didn't read it.

13. Pirate Dave and the Captain’s Ghost by Toni L. P. Kelner. An okay story about a retreat gone wrong. 3 stars.