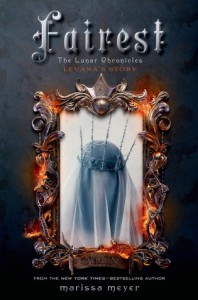 Wow, what a book. It seems like it's trying to portray Levana has a sympathetic character when she was young. This works for awhile and then she'll disregard thousands/millions of lives just because she doesn't want another nation to think they need them for supplies. She loves a guard when she's very young and then sees kindness as reciprocation. He's married but although she doesn't cause the demise of his wife, she bends the guard to her will even making herself look like his deceased wife. In the end, her ambitions trump everything. And this mostly happens while she's in her teens.