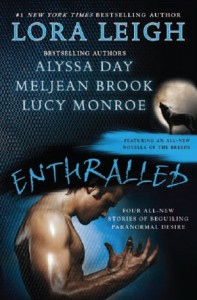 1. The Devil's Due by Lora Leigh. For a Breed book, the "romance" was watered down, which I actually enjoyed. The series got to the point where it was a sexual hunger that almost hurt and the sex didn't seem to feel any better, especially for the women. This one was a nice story about a Breed that thought he'd never find love and the woman that was rejected when her DNA was found out. Good story. 3-1/2 stars.

2. The Curse of the Black Swan by Alyssa Day. At first I thought, "Ugh, a black swan curse story. Boring!" Well this was much better than I thought. I wish I would have learned a little more about what happened before the epilogue. 3-1/2 stars.

3. Salvage by Meljean Brook. From reading this story, I'm guessing that Big Thom played a role in the previous books but for the life of me I can't remember him. In this story he finally returns to his abandoned wife but maybe it's too late. Very good story. 4 stars.

4. Ecstasy Under the Moon by Lucy Monroe. I don't think the title really follows the story. It's a love story with sex but it is more subtle, with a slower approach to love and the sex scene wasn't a pivotal part of the story. The story itself was very good. I really liked it which is kind of surprising because I didn't like the first book of this series very much. 4 stars.